It was a busy Saturday.

In the morning from 7:30 AM, three guys in our apartment house, including me, went out on the street and joined in cleaning the streets with 30 other people.  In small cities and towns, not to mention villages, traditional societies still survive.  They help each other to make the society better.  I prefer city lives and it annoys me in fact, but as an outsider, I respected the tradition.

Then I had my mini taken away for the bianual inspection.  It will come back in a week.

During the lunch time, I installed two 1-G RAMs into our new computer.  It became noticably fast.

After finishing my work, we played tennis for 1 and a half hour.  I saved myself because of the wound in my leg. But it was getting fun and I started running and, ouch, I injured the right thigh again.  Well it does not hurt that much.

On the way back home, we saw a man selling oden, or pot-au-feu japonais, outside in front of a convenient store.  We felt sorry for him and bought some.

We had the oden as an appatizer. 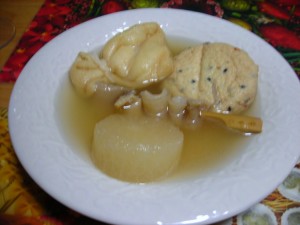 We had a bottle of Australian pino noir with pizza to celebrate Aleksandr’s birthday, Katya’s father.

Katya became weak in alcohol.  She took pills made of the essence of freshwater clams, which are supposed to work for preventing hangovers.

We will see whether it worked.

Hello! I am a scientist running apartments in Tokyo and Yokohama. If you are willing to live in Japan, please get in touch.
View all posts by Muravej →
This entry was posted in Daily life and tagged apartment, computer, Katya, Maya-san, mini, Tennis. Bookmark the permalink.