I came back home a little bit earlier than usual for a Jingisukan evening as we had planned.

I suggested to do some indoor BBQ, which was reasonably denied by Katya.

So I cooked it in the kitchen, and brought it to the table. 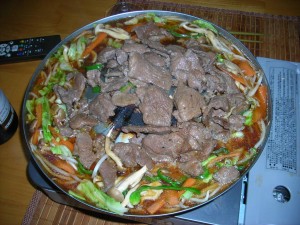 It tasted good, however, it could have been better if we had grilled it on the table. We finished one pack of meat. I cooked some extra vegetables.

The ex-student gave us six packs, so we will enjoy it five times more.

When I was cooking, a box arrived from my parents, who had traveled to Shikoku area.  They sent us a lot of vegetables as well as the souvenirs from Shikoku. 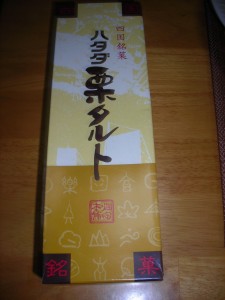 Actually, it was not a tarte, but a sort of castella with sweat beans inside.

Hello! I am a scientist running apartments in Tokyo and Yokohama. If you are willing to live in Japan, please get in touch.
View all posts by Muravej →
This entry was posted in cooking, Daily life, Katya and tagged dinner, Jingisukan, Katya, parents, student. Bookmark the permalink.