In the morning, I took DVDs back to TSUTAYA before the shop opened so that we did not have to be charged for the delay. Then I walked with Maya-san by Arakawa river.

For breakfast, we went to Gusto. We had relatively big brunch. 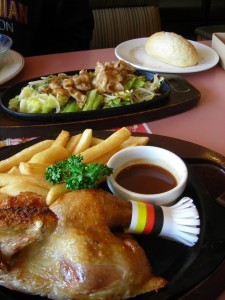 In the afternoon, we went to “Fish Land Ishihara” and bought three lambchop rasboras to put them in our aquarium.  Fish with bright color should go well with the others. 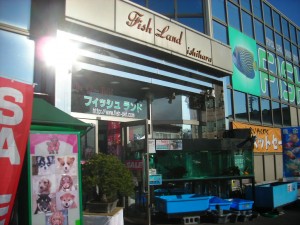 However, the saleswoman mistakenly gave us two orange tetras and two red cherry shrimp (we think that the she did not see well). Since the fish bag was wrapped, we found it only at home. We decided to accept it thinking that taking them back could be simply harmful (sorry for Katya who does not like shrimp).

After the afternoon walk with Maya-san, we thought of trying a new Chinese restaurant “Taizan Hanten”, which we had known but never tried. It seemed that the restaurant is small but genuine Chinese.

It was old and not wide inside. Only a middle-aged couple were having dinner.

But, yes, the waitress, probably the owner’s wife, was Chinese. 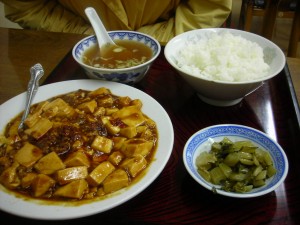 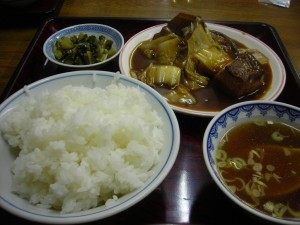 The tastes were good. I thought the tastes are comparable to those of Dohshinboh. This restaurant is much closer to our apartment, but the price is more expensive and the inside is older than in Dohshinboh.

Anyway, we have an option, now.

After coming back home, Katya and I watched funny DVDs. The first one was “Game of Tag, 24 hours in a gym”. 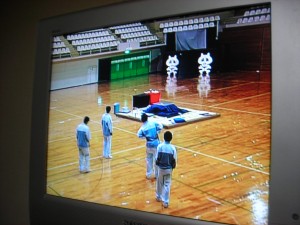 We preferred the second one, “Never laugh in this hospital”. 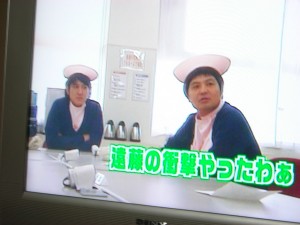 Hello! I am a scientist running apartments in Tokyo and Yokohama. If you are willing to live in Japan, please get in touch.
View all posts by Muravej →
This entry was posted in Daily life, Katya, Liesure, Maya-san, Restaurant and tagged aquarium, Arakawa, DVD, fish, Gusto, Katya, Maya-san, restaurant, TSUTAYA. Bookmark the permalink.