January 2006, Our Encounter in China

On the way back home from my sabbatical in Illinois to Japan, I dropped by Ghangzhou, China for a visit to a lab and for my rest before going back to work.  I stayed at “Victory Hotel”, where Katya happened to stay.  She was traveling around China to see the country.  She already spoke Chinese, then.

On the day of arrival, I met her and invited her to dinner at a restaurant in the hotel.  I remember we had a whole fish.  She was used to eating Chinese food, and we had meals spicy.

The following day, we decided to have a one-hour bus trip to Zhongshan city.  This is a picture before leaving the hotel. 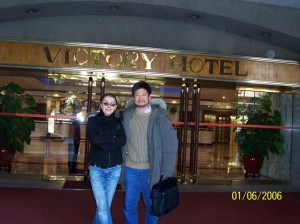 I do not remember who took this picture of us in Zhongshan city. 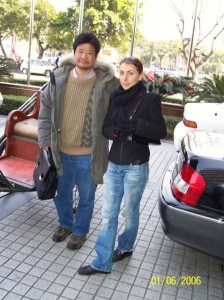 She had been in China for five months when I met her.  I was surprised that Katya was very used to Chinese life.

On January 7, 2006, I left Ghangzhou for Narita, Japan.  We had drinks in an airport coffee shop. 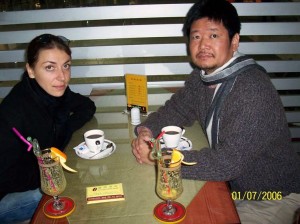 So we left each other.  We have only three pictures.  It has been five years since we first met.

Hello! I am a scientist running apartments in Tokyo and Yokohama. If you are willing to live in Japan, please get in touch.
View all posts by Muravej →
This entry was posted in Katya, Trip and tagged China, Chinese, dinner, Ghangzhou, hotel, Illinois, Katya, restaurant, sabbatical, trip. Bookmark the permalink.