Driving back to Kofu

The government asked me to prepare budget plan for the new project.  The deadline was set September 26.  We have very limited time.

The reason we have only two weeks is because of the earthquake; the submission of the proposal was extended for one month, but the projects start on October 1 as usual.

The sub leader of the project, a researcher working for a company, suggested me to meet at 2 PM in Kofu, which I agreed.

I woke up at 6 AM this morning, but it was too early. I slept again and woke up at 8:30 AM! Too late for the departure.

I took a shower, had a quick breakfast, packed my stuffs, checked out, and left the hotel at 9:30 AM.

Then I drove back to Kofu. The traffic was very smooth.

I stopped twice at service areas to fill up the tank. I bought souvenirs for Katya, too. I did not eat anything. 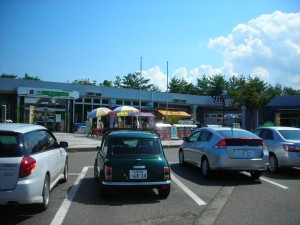 I arrived at the institute at 2:20 PM, a bit later than we planned. The man had already been there.

We started talking about the budgets, the total of which was reduced from 300 to 200 million yen.  We discussed about the budget of each year for each organization. Then we made up drafts of the documents.

I will ask each organization to prepare its research schedules and budgets of 4 years. Then, I will make up the schedules of the whole project and submit it on September 26.

Hello! I am a scientist running apartments in Tokyo and Yokohama. If you are willing to live in Japan, please get in touch.
View all posts by Muravej →
This entry was posted in Daily life, Earthquake, Science and Technology, Trip and tagged budget, company, earthquake, government, hotel, institute, Kofu, organization, project, proposal, researcher, submission. Bookmark the permalink.