At midnight, I started watching an Olympic soccer game: Japan vs. Spain, prior to the opening ceremony. Japan is ranked #20 while Spain #1. I was not expecting anything. From a corner kick, Japan happened to get a goal. Moreover, Spain lost a player because of a serious foul.

I thought I would keep watching until Japan loses a few goals. However, the Japanese players played  well and they won! I was in fact more surprised than happy, and I soon went to sleep.

In the morning, I watched TV news. I realized it was a big win for them. Then I went to school.

It was a hot day again with a temperature of 37 degree C in Kofu.

In the evening, the tennis lesson in Kose Sports Park started at 8 PM and ended at 9:30 PM. The lesson was held later than usual. 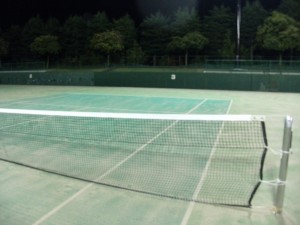 It was a little cooler playing late in the evening.

Hello! I am a scientist running apartments in Tokyo and Yokohama. If you are willing to live in Japan, please get in touch.
View all posts by Muravej →
This entry was posted in Apartment, Daily life and tagged Japan, Kofu, Kose Sports Park, lesson, news, Olympic games, school, soccer, Spain, temperature, Tennis, TV. Bookmark the permalink.